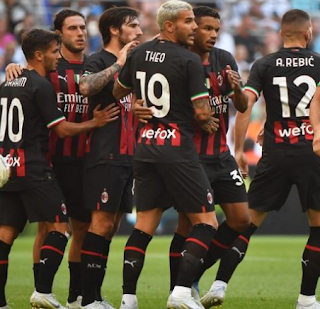 In this match, AC Milan was actually surprised by Vicenza’s goal scored by Alex Rolfini when the game had only been running for one minute.
However, Milan immediately got up and scored a 1-1 equalizer through Rafael Leao’s hard kick in the 21st minute.
Milan then made Vicenza slump after recording three consecutive goals through Junior Messias (30′), Ante Rebic (30′), and Nicola Dalmonte (own goal 31′).
Thanks to that, Milan managed to close the first half with a 4-1 lead over Vicenza.
A landslide advantage has not stopped Milan’s desire to add to the coffers of goals. They continued to pound Vicenza’s defenses. AC Milan got a chance from a corner kick in the 50th minute. Ismael Bennacer stepped forward as the executor.
Ismael Bennacer sent a cross to Fikayo Tomori who was in the Vicenza penalty box. Fikayo Tomori is actually under the guard of an opposing player.
However, he managed to break free and hit the ball into the net through his header to put Milan ahead 5-1.
Entering the 69th minute, Brahim Diaz sent a through ball to Ante Rebic from the middle of the playing field.
Ante Rebic received the pass perfectly. He had time to dribble before scoring with a low kick. Thus, AC Milan managed to win the match over Vicenza with a landslide score of 6-1.
Overall, Milan’s goals were scored by Rafael Leao (11′), Junior Messias (21′), Ante Rebic (30′, 69′), Nicola Dalmonte (31′ b.d), and Fikayo Tomori (50′).