The prediction of Everton vs Chelsea in the 2021/2022 Premier League schedule will be a match that will be difficult for The Toffees to go through. Matchday 35 of the EPL Premier League will be held at Goodison Park Stadium and can be watched via Mola TV live streaming on Sunday, 1 May 2022, at 20.00 WIB. 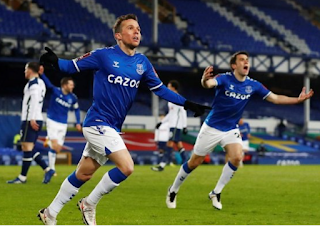 Everton are currently on the verge of relegation. Defeat in the Mersyeside Derby saw the Toffees drop to 18th, while lower-tier rivals Burnley moved up one place after a win over Wolverhampton Wanderers.

Given that Everton need all three points to escape the relegation zone, Chelsea may not let this game go easily. The Blues remain determined to achieve maximum results until the end of the season.

The Premier League has six games left for Everton, one more than Burnley. If you want to keep a chance to survive in the league, Everton need to continue to collect points until the final party.

This situation could put Richarlison and colleagues under even more pressure. However, Frank Lampard as the tactician still thinks positively.

“Sometimes people from outside ask me, because of our current position, ‘Are you enjoying it? How difficult is that?’ I really like it,” said Lampard.

The Chelsea legend stated that he will make every effort to bring Everton to where he wants to be. Moreover, he has been very well supported and welcomed by the fans.

“In terms of my dedication to this job, I’m absolutely going to give everything as long as Everton want me and I can take them where I think we can go,” said Lampard.

Estimated Line-up for Everton vs Chelsea

Lampard is still faced with injury problems that plagued his squad. Four players may not play against Chelsea, including Andros Townsend and Nathan Patterson.

Meanwhile, Yerry Mina may be able to return to action after missing the Merseyside Derby last week. However, with Dominic Calvert Lewin, his status is still uncertain.

On the other hand, Andreas Christensen and Ross Barkley are still not fit. With this condition, Thomas Tuchel is expected to install the same formation as against Manchester United last week.

The two teams share the points in the first meeting of the season in December 2021. However, neither side has looked to dominate since the last five duels between Everton and Chelsea.

The Blues and The Toffees twice beat each other. The meeting tomorrow night will determine the next head to head record of how the two sides who currently have different fates will fight.

Results of the last 5 matches Everton vs Chelsea

If you want to access this match on Mola TV, football fans can subscribe to the Mola TV package first.